In Part III, I proved my Power Macintosh 8600/200 wasn’t completely dead – at least it boots. Now it’s time to clean it up so I can start really working on it.

Cleaning out the cobwebs

Despite being in relatively good condition for a 20 year-old computer, the machine has its fair share of dings and scuffs. Neither it nor the included keyboard and mouse seem to have suffered from any yellowing (typical of old computer plastics) but still, they’ve all got a definite film of grime and dust that makes them a little gross to handle.

First step, haul everything outside. I took off the removable side panel so I could access the inside. Then I used an air compressor to blow out all of the dust bunnies. It didn’t take very long, much faster than if I’d tried with one of those tiny cans of compressed air.

Scrubbing off the grime

Next I focused on the outside panels. I wiped everything down with a rag dipped in rubbing alcohol, and the layers of grime came right off. The keyboard and mouse felt a million times better after a quick wipe down. The worst offenders were all the cables – the soft sheaths tend to degrade over time, almost as if they are melting, so they get sticky and collect all manner of grime.

A popular restoration is to “retrobrite” external plastics. That is, soak them in a hydrogen peroxide solution in the sun to bleach away the yellowness of age. This machine hasn’t really yellowed, so I could probably get away with skipping that process. But if I wanted to, I’d have to solve another problem first – it seems the panels are attached to the metal chassis by bits of melted plastic rather than tabs or screws. So I can’t remove the plastic from the panels without breaking them off.

But that’s a problem for another day. Right now, time to address some of the scuffs and dings.

I took the one removable side panel and got to work with the rag and rubbing alcohol. I scrubbed the panel for a solid hour – until my hands and fingers were too sore to continue. But what a difference!

There were a couple tiny spots where I used a Magic Eraser to buff out some deeper scratches. Not my favorite method, as it looks fine at a casual glance but under certain lighting you can see reflections where the texture of the plastic was buffed out too. For reference, here’s the before and after (sorry for the different lighting): 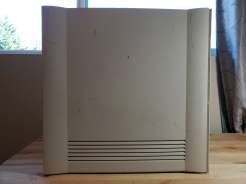 Overall the results were very promising. My hands were too tired to continue, and being unable to remove the other panels means the rest will be little more difficult to manipulate, but at least I know it’s possible to get this thing in tip-top shape.

Now that the machine doesn’t feel gross to handle, I can start focusing on getting it set up proper.

We’ll get to that in Part V!