Mzinga is my collection of open-source software to play the board game Hive, and I last posted about it back in November 2018.

A lot has happened since then, so this feels almost like a re-launch than anything. Essentially, Mzinga development stalled at the end of 2019. I made a variety of internal performance improvements, but the biggest changes were polishing the UI of the Viewer, including adding the ability to save and review games later, in a new review mode.

Nothing happened for Mzinga in 2020, though I did spend some time getting acquainted with .Net Core and Avalonia, an exciting cross-platform UI framework similar to WPF.

I did some smaller projects with this “new” way to write C#, and when Avalonia released their big 0.10.0 update in December 2020, I decided it was time to try porting one of my bigger apps to this new platform.

So in January of this year I ported Mzinga to .NET 5, and rewrote the Viewer in Avalonia instead of WPF. The end result has been more than worth the effort.

I got to keep 99% of my existing code, and with a just couple weekends of work, starting with Mzinga v0.10.0, the entire project is cross-platform, with releases on Windows, MacOS, and Linux. 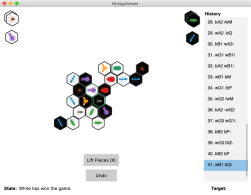 Having the code cross-platform really opens up the opportunity for getting other developers working on their own AIs. By having the Viewer available on Mac and Linux, more developers are willing to invest in writing their own UHP engines and Hive AIs, which was the whole point of Mzinga in the first place.

I’m in conversations with several such developers- one even found a bug in Mzinga that’s been there for years! They all appreciate the level of documentation and tools I’ve provided to help give them a place to get started.

To that end, I’ve also taken some stabs at building some more engines myself. I started a UHP Sample Code repo, with simple sample engines to get people started. They only implement the base game (no expansions), have no AI, and are not optimized, but they meet the minimum requirements for an engine, and therefore are yet another starting point for developers. I’ve got versions in both C++ and C#, and I’ll probably also create versions in Python and JavaScript too.

For Mzinga itself, it’s a big, complicated codebase, and I don’t see any “easy wins” for making it faster or the AI stronger.

So on top of everything else, I’ve also started MzingaCpp, which is a brand new engine written completely in C++. Here I’m taking all that I’ve learned and focusing on making the fastest possible engine, with hopefully the strongest AI. Right now it’s got the base game and expansions up and running, and while it doesn’t have any AI yet, its move generator is already 1.5x -2x the speed of Mzinga, which is a great start. 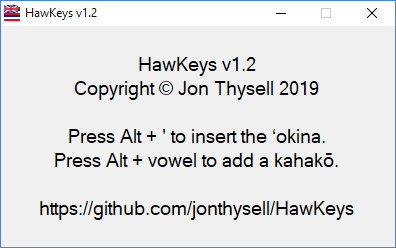 Last year I started learning Hawaiian in an effort to improve my understanding of the music that I love. I found that I wasn’t satisfied with the available tools for typing the ʻokina and kahakōs used in the Hawaiian language.

At first I wrote a little AutoHotKey script to make it easier, and it works, but AutoHotKey is kind of a heavy tool for so simple a use case.

This year I set about writing a simple Windows app that gave the same result: global hotkeys to quickly type ʻokinas and kahakōs. It mean learning some old-school Windows coding around creating hot keys and simulating the keyboard, but the result is a simple .NET 2.0 WinForms app called HawKeys. It works great, and even better, HawKeys is my first app published on the Microsoft Store!

You can follow the development at HawKeys on GitHub.

Mzinga is my open-source AI for the board game, Hive, and I last posted about it back in February 2018.

So what’s changed in the last nine months?

From an end user standpoint, the high-level highlights are:

From an engine / AI standpoint, the highlights are:

I think the biggest upgrades for users are the inclusion of the expansion pieces, the much friendlier Viewer, and the fact that it’s now portable. Technically all you need to play Hive is the single Mzinga.Viewer.exe from the portable release. You can throw it on a flash drive and play Hive on any Windows (Vista or higher) computer.

On the research front, the biggest discovery for me was of the TreeStrap self-training algorithm. I won’t go into details here, (I talk about it a little in this BoardGameGeek post), but suffice it to say that it provided a more targeted way to improve Mzinga’s AI. Rather than rely solely on my evolution-based model (which, due to the limitations of my population sizes and my “rough” implementation of genetics, produced an often homogeneous pool of AIs) TreeStrap let me force an individual AI to self-train by playing games against itself and intelligently updating its own metric weights.

It was through using TreeStrap that I created a decent AI for playing games with both the Mosquito and Ladybug expansion pieces. However, it was only in testing that AI against my existing pool of evolved AIs that I learned that it only excelled in that game type. In fact that AI did horribly in other game types, which lead me to believe that it might not be possible to create one set of weights that works in all game types. This propelled me to finally expand Mzinga to support specialized weights for each game type.

But now I have a pretty robust “pipeline” for improving Mzinga’s AI. First, I have eight special AIs, each self-training against for one particular game type. Then I push those AIs into my pool of other AIs and have them all fight each other (no more evolution, just the fighting) to evaluate their strength. Then I take the top AIs for each game type (usually, but not always, the self-trained AIs) and inject their weights into Mzinga’s Engine.

In theory, if I keep repeating that loop then Mzinga’s AI should get stronger and stronger. Also I can keep “snapshot” the AI every time I release a new version and keep it in the AI pool, so I can track that the newer AIs are objectively stronger than the older ones.

As this self-improvement loop is already starting to pan out, I’ve begun spreading the load across multiple computers. I can now have one set of computers that continuously run the self-training algorithm on the special AIs and push the results to OneDrive, while another computer regularly grabs those AIs and tests them in combat.

Last year I was in the mood to write a game, and in exploring the LÖVE game framework, I wrote a few old-school retro games under a project I named RetroLove.

Recently I picked up the project again and consolidated the three games I’d written (Pong, Breakout, and Asteroids), into a single game with a selection menu. I also started exploring how to release the game, even going so far as to figuring out how to get the Android port of LÖVE building on Windows.

Today I’m announcing the v1.0.0 release of RetroLove for both Windows and Android.

Both the Windows zip release and the side-loadable Android apk can be downloaded from RetroLove Releases on GitHub.

Additionally, you can get RetroLove for Android on Google Play. This marks the first time I’ve released an app on a mobile platform!

Check it out and tell me what you think,

P.S. While RetroLove itself is not the most mind-blowing game, the exercise has gotten me both my first mobile app (only 8 years in the making!) and gotten me well set up to building and releasing more games with LÖVE. 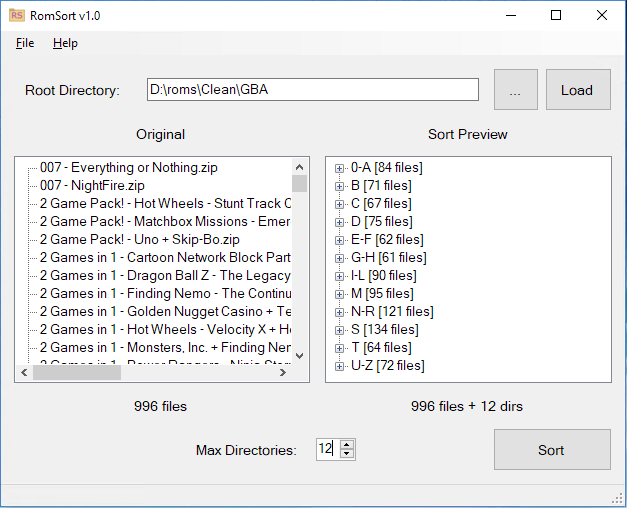 About a year ago I wrote a little command-line tool for sorting ROM files into alphabetical sub-directories. The main feature was it could intelligently combine the smaller sub-directories, which is useful when you’re browsing on low-resolution screens. However after I got the code working I never got around to sharing it.

So I took some time to re-package the code into a small .NET 2.0 WinForms app. It is pretty straightforward to use, and even gives you a live preview of what the end result will be before you use it. Note that filename collisions will be marked in red and it won’t let you perform the sort if there are any.

Source and binaries (under releases) @ RomSort on GitHub.